To give you the best possible shopping experience, we use cookies. By continuing to browse you accept our use of cookies. To find out more click here.

David Nieper is proud to support Fashion Revolution Week 2019, calling for greater transparency in the fashion industry. The #whomademyclothes campaign falls each year on the anniversary of the Rana Plaza factory collapse in Bangladesh, which killed 1138 people and injured many more on 24th April 2013. 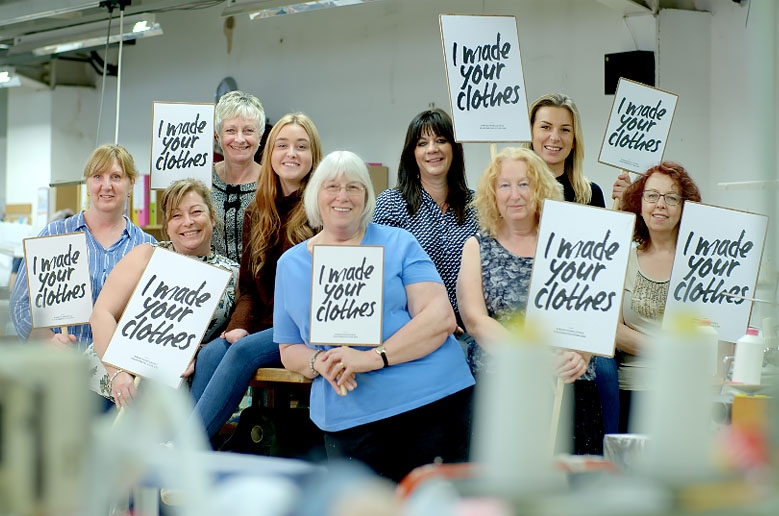 David Nieper is a family run business, established in 1961 and employing over 300 skilled staff. The company has never ‘gone offshore’ and has always stayed loyal to local people and for over 55 years has continuously invested in local skills.

David Nieper has always gone the extra mile to prioritize provenance and integrity in the production process of clothes made in their factory. Indeed, it is a long standing custom in the company that every single piece of clothing made is fastened with a swing-tag, which is signed by the people involved in making it – from the seamstress, to the person that does the ironing!

All David Nieper collections are designed and made from first sketch to final stitch from the fashion house in Derbyshire, with unswerving commitment not just to the exceptional quality of each garment sold, but also to the well-being of the people that make them.

From £4.95, fully insured delivery in the UK or to anywhere in the world.

Send items back free of charge, as soon as it’s safe and advisable to do so.

We'd love to send you complimentary luxury catalogues of our latest collections.

Everything you buy is fully covered by our 100% No Quibble, Satisfaction Guarantee

Be the first to hear about our offers, sales and news…

No thanks, continue shopping

NO THANKS, JUST SEND ME EMAILS

Yes please. My address is:

There will be lots more good things coming your way soon

Menu
Made in England